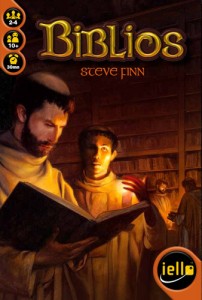 Dungeon crawling, city building, empire expanding; all common themes to find in board games and the board game hobby. There are a rare few games, however, that find ways to use themes that most of us would never imagine; one such game is Biblios; a game of monastic library curation.

Biblios sets players as abbots attempting to amass a grand library with the victor being the player who manages to claim the most victory points. Victory points are awarded at the end of the game with players scoring the various victory dependent upon the cards in their hand and the value on each of the colored die.

There are 5 die in the game as well as 5 suits; blue (pigments), green (holy books), brown (monks), orange (manuscripts), red (forbidden tomes). Each die represents the victory point value of the category it represents; all starting at a value of 3. At the end of the game each player will have amassed a hand of cards; the suited cards will have a symbol in the upper right corresponding to the category, so a red card would have a skull symbol. The upper left corner has a number; this number represents the card’s value; note these corners also have the color associated with the category so the card’s are easily identifiable between this as well as the adjacent symbol. There is then a letter in the bottom right used for breaking ties and an image on the card for flavor.

The game plays in 2 phases; the gift phase and the auction phase. During the first phase of the game the active player allocates a set number of cards (alters by player count) to one of three areas; face down in front of the active player, face up in the public space, or face down in the auction pile. They must and may only place 1 card in front of themselve and one card in the auction pile; the remaining cards being placed into the public space. The catch is that cards are drafted one at a time; and once placed cannot be moved. Once all the cards have been allocated the inactive players progress clockwise taking a card from the public space. Once all cards have been taken the player to the left becomes the active player and repeats the process. This continues until the draw pile has been emptied. (note: church cards pause game play and take effect; these cards allow a player to alter the values of the dice and thus the victory points allocated to the category of their choosing either positively or negatively)

The Auction phase then begins once the draw pile has been emptied. This phase begins with the auction pile being shuffled and the cards then being auctioned off one at a time. Play will continue in turn order as before for this phase with each active player starting the new card’s auction. Like in standard bidding games a player can outbid the previous bidder or pass; once all players but one have passed the high bidder takes the card and the next player becomes the active player and starts the auction of the next card; note if no one bids the card is discarded. The winning bidder must discard gold cards equal to or greater than the offered bid; no change is given if the player is forced to overpay; if the player cannot afford their bid they are penalized with each other player drawing a card at random from the penalized player’s hand before the card is returned to auction at which the penalized player cannot bid. Sometimes the auctioned card will be a gold card; in these scenarios the players bid the number of cards they are willing to discard to gain the card for auction; the discarded cards can be any combination of gold or category cards.

I was intrigued in the game when I first heard of it; the theme was one I had not seen often; the only game I can even now think of that focuses around the lives of monks is Mystery of the Abbey. The use of die that you don’t roll was equally intriguing and it was thus with great anticipation I set the game on the table.

The core mechanic of card drafting is fantastically executed. As the active player one must make fairly critical choices with fairly limited information; this adds a great element of risk as a player must choose where to allocate cards while unaware if the card they are holding is the card that will be most beneficial to them or if they should wait and hope for better.

Auctioning is done well in the game by having the means of future auctions up for auction themselves; a player can get rid of useless category cards to acquire gold to buy high value cards in a category they care about. Removing change from the algorithm adds some risk as well as a player will often want to pay in perfect change though for some cards they are forced to spend a gold beyond their plan. Players may also attempt to bluff the price up on a competitor though if they can’t afford the bluff will find himself hurt in the process. These elements of risk aid the game greatly in immersion.

The look of the game is equally marvelous from the moment you open the box; which opens like a book, to the feel of the large dice, and the cards which are easily identifiable as explained above as well as decorated with nice flavor images. The game’s downfall, however, comes in pacing. These elements of risk and imperfect decision making have a strong tendency to lead into analysis paralysis. While the game manages to keep players involved between their tenure as active player the chance of one player’s turn taking as long as everyone else’s isn’t uncommon.

Come back tomorrow while we look at another monastic game in Mystery of the Abbey
Until then you can find us on facebook and twitter at:
Twitter @Gam3rsR3mors3
Facbook /TheGamersRemorse