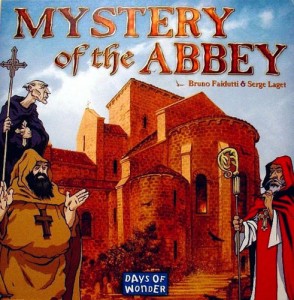 Just about everyone is familiar with the game Clue or one of its many versions. The game has players trapped in a mansion attempting to solve the mystery of who killed their host, where the murder happened, and with what weapon. Players are equally familiar with the game Guess who; attempt to deduct which character your opponent has by asking a series of questions so as to narrow down the possibilities by way of process of elimination. What happens when these games merge? What happens when you find a monk dead at the bottom of a cliff? That is the what players must solve in Mystery of the Abbey.

Mystery of the Abbey is a deduction game much in the same way as Clue with a new theme and new mechanics to match. In MotA each player takes on the role of a person who came upon the Abbey to find the Abbot in need. One of the brothers was found dead at the base of a cliff and it looks like it was murder, but which of the monks would have had the means and motive?

The goal of Mystery of the Abbey is to have the most points at the end of the game; this is best done by solving the mystery and identifying which monk is guilty of the crime. Each monk, however has 5 traits; their Order (of which there are 3), Title (of which there are 3), Hood (vs no hood), Facial Hair (vs clean shaven), and Girth (fat or thin). Throughout the game players will make accusations; at the end of the game they are awarded points for their accurate claims and deducted points for inaccurate claims. The game gets its difficulty in that there are 24 potential suspects with varied combinations of the above traits, of which there are 12 traits within the 5 categories.

Each round progresses in turn order with the starting player advancing the Mass bell; if it advances off the 4 location Mass is called and all players must return to the Chapel and the card’s effect takes place. If Mass was not called then the player will move their pawn 1 or 2 spaces in any direction. If a player ends their turn in the same room as another player the active player must question the other player; there are few limits on the questions other than the question’s answer cannot be the name of a monk. Players have 2 options in response; they can answer the question honestly then get to pose a question of their own or they can put their fingers to their mouth indicating an oath of silence and thus not answer the question.

One of the aspects of the game that set it apart from many other mystery games is that in MotA each room has various special benefits; I will explain these rooms for they impact future aspects of my review. Confessionals have a die with the color of the most recent visitor face up; entering the confessional grants a player to take a card at random from the player with the showing color; after taking a card, however, the die is then rotated to show that players color; thus the die always show the most recent visitor to the confessionals. There are colored rooms for each pawn; each of these acts similar to the confessional in that entering a room a player gets to draw a card from the player of the corresponding color; if the player of that color moves into the room while you are still in it they get their card back and your pawn is returned to the chapel. The Scriptorium grants a player a card from the Scriptorum deck; these cards are either immediate effect or kept to be played later and can aid the active player or hinder the other players. Within the Scriptorium is the Library; this room is only open to the player(s) with the fewest cards in their hand, at least one player must have more cards than you to enter the Library and no player can have fewer cards than you. The Parlor allows a player to draw a card from the previously set aside cards; if those cards are all empty it allows the player to choose another opponent to reveal a card to you; you must declare 2 of the 2 possible traits, if they have a card matching those traits they must show it to you. The Crypt allows players to take a Crypta card granting them the ability to take a turn after they complete a turn; they can only have one Crypta card at a time, however, and must discard the card to claim the extra turn. Other rooms serve as blank space with the exception of the Chapel where players gather at each Mass; it is in the chapel that player may make Revelations and Accusations.

Throughout play whenever a character is in the Chapel they can make a revelation; these are statements about the traits of the guilty monk. There are thus a total of 12 possible revelations; once a revelation is made another player can not make the same revelation. When the guilty monk is revealed players score 2 points for every correct revelation and lose 1 point for every incorrect revelation. Alternatively once all cards have been claimed from the parlor a player may make an Accusation and call the name of the guilty monk; if a player has the monk in their hand they reveal the monk to prove their innocence. The false accuser thus loses 2 points. On a correct Accusation the player scores 4 points; if no one proves the monks innocence the accuser draws the monk from under the board to reveal the accused. In case of a false accusation, playing out of turn, or any other reason the players choose a player must pay penance; meaning return to the chapel and spend their next turn praying (they loose their next turn).

The final aspect that sets this game apart is the Mass function. Every 4 rounds the players are called to Mass and returned to the Chapel. Players will then hand cards of their choice to the player to their left (the number of cards is indicated on the mass card), an event card is drawn and resolved, and the mass deck rotates to the player on the right making them the new starting player.

I first played MotA at a family game day with hesitation, Clue has become one of the games that people choose not to play often at our table; my dad, brother, and I can be blamed for that one. The game’s variance leveled the playing field greatly.While some of us had very elaborate means of deducing guilty parties in clue; MotA takes the riddle aspect and merges it with a Guess Whoesque sense of, “How many Franciscans do you have?” The questioning in Mystery is much more intricate and the ability to counter question adds additional strategy as far as when to answer and when to take an oath of silence.

The game’s visuals are fun with each of the 24 monks having their own portraits drawn on the suspect cards with partnered iconography for the traits. Each player has a deduction sheet with images of the various monks on which they can take notes; mark off innocents and narrow down the guilty. The board itself is designed just as well with each of the rooms showing signs of the rooms purpose and function.

Mechanically the game plays very well as players must balance what they want to achieve with the limit of movement and 4 turns per Mass. Adding the aspect of rotating hands altered the standard deduction greatly making players answers alter frequently as they may have held 2 hooded monks last turn but may hold 3 now.

Come back tomorrow while we look at the grand Murder Mystery game; Clue.
Until then you can find us on facebook and twitter at:
Twitter @Gam3rsR3mors3
Facbook /TheGamersRemorse