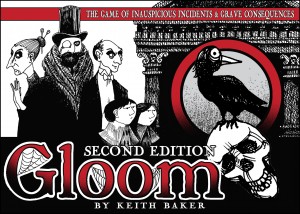 I love a good story; and I love a good game. So what happens when a game tells a story? What if that is a sad story; a tragedy? Gloom happens.

Gloom went from near obscurity to a hit due to its feature on TableTop. It was with this exposure that I was able to break out my copy again which I had only previously had a few chances to play. Gloom is a hand management storytelling hybrid in which players are attempting to use the cards in their hand to tell a story about the tragedies afflicting their families and the triumphs effecting their neighbors.

Each player takes on one of the four families placing all the family members before them then drawing a hand of 5 cards. Players then play in turn order building their hand and playing cards on themselves and their neighbors. As players play cards they are tasked with telling the story behind the card; what caused the character’s headache, or why was there a snake in there bed, how did they fall down the well?

As the game progresses the story unravels; each character facing great misfortune and occasional joys. The game breaks the standard in the way the cars are designed around the key mechanic. That mechanic being the character’s sorrow, or lack there of. The cards are transparent with 3 spaces for circles on the left side; these circles will hold either negative or positive numbers; additionally cards may have a circle in the lower right showing story elements such as money, marriage, and death among others.

Whenever a player has a Untimely Death card they can play it on any character, regardless of the character’s owner. Once a player is thus killed no further cards may be played on them and their final value is set at whatever the current total of the visible circles may be. Once the first family is eliminated the game ends and players tally their scores. The catch? Only dead players scores count; and the family with the lowest overall score is deemed the victor. This was a super fast fly through the rules; again this is not a how to play tutorial but rather a broader overview as the game as a whole.

The game only uses a few mechanics, but it uses them well. The use of card drafting and hand management is done in a way that is different than many games due to the card’s transparent nature. Players must choose between playing cards and discarding cards; meeting their hand at a count of 5. Partnering that with the variances on the cards scores, and additional abilities adds an element of strategy as players must attempt to maximize their characters hardship while maximizing the other player’s tribulation while bearing in mind they must kill their characters so as to score their points at the end of the game.

The game’s use of player elimination as an end game trigger is done well in that while player elimination is a must as players kill off each others families, as well as their own, no player will find themselves a sudden spectator. This constant involvement insures a more even experience between players that may bring them back for more.

The game’s speed is a benefit as the minimal turn actions and relatively small hand size keep analysis paralysis to a minimum while the storytelling keeps all players engaged as they share in the creation of the tale while focus must also be given so they can build upon the tale. Players splitting their focus thus between the game and the tv, their phone, or other distractions will pose the risk of hindering the game and missing the story. Without distractions, however, this is a less common occurrence.

I first received Gloom as a gift and, having heard of the game, I was excited to give it a try. Once to the table I was intrigued. My first play went quite smoothly with the players all sharing a hand in weaving the tale and laughing at one another’s successes and failures. A few plays later with a new group, however, I learned a key rule that should have been obvious from the start. Gloom is similar to Fiasco in that it is design for players who enjoy story in gaming. This other play through the players were used to dry euros games and did not desire to keep the story along a natural progression.

The game’s art fits the silly themes with vintageesque art and icons that are easily distinguishable and non distracting from the rest of the info on the card. While the amount of icons can be off putting to new players they are quite simple and often relate to an additional text on the card such as the effect or the title and serve more as a reminder of what has happened to the character than an ongoing effec.

One could and some have argued that games such as Gloom should count more as activities than games; and thus rate and review them more poorly. This is the same argument I once made for party games, until I realized it is a stupid and unfair way to look at the media and why I would recommend Gloom to anyone who loves storytelling games.

Join tomorrow as we look at another of my favorites; Geister Geister Schatzsumeister; winner of this last kinder-spiel (kids game of the year).