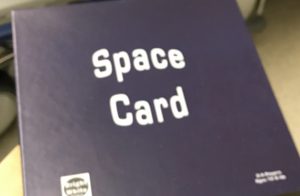 So right about now you are probably thinking this game sounds as generic as they come. And you aren’t wrong. The theme is sort of weird and generic. Each player is a rocket ship captain who has 10 energy to use on their ship. Do you put your energy towards your weapons to be a jerk? Do you divert energy to the shields with a fair bit towards the engines? And to what end? Points! Points are indeed the final frontier! 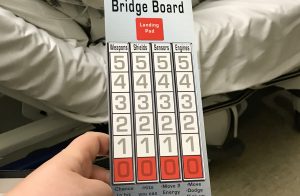 *sorry about the photo. I was in a hospital waiting room. A story for a different day!!

So how does the game play?

That’s actually its strong suit… sort of. It can get a bit repetitive and you probably want to play it with 4 players who all like take that.

Step 1. Give yourself 10 energy points on your player board. 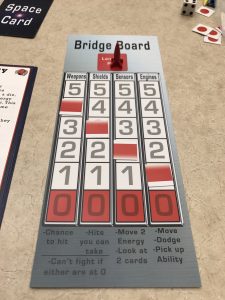 Weapons allow you to attack npcs and other players. You roll a d6 and then it is a hit if the value is your weapon value or lower.

The shields are how many times you can take a hit before you must go back to home base. Each time a player or npc hits you, reduce the level of your shields.

Sensors are a way to move power within your ship or look through the face down cards in your “sector”.

And engines allow you to move between cards in space or draw from the abilities deck.

Alright. I just talked about 2 important concepts. We should talk about those. 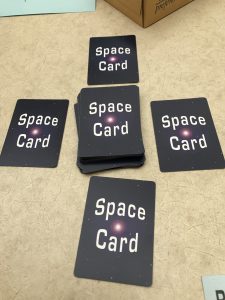 Space or “the sector” are 4 cards taken from the space card deck and put out in the middle of the table. These represent the locations players can travel to by expending their engine energy.

When players move to these locations they flip them over and then deal with the effect. Sometimes it is an instant effect. 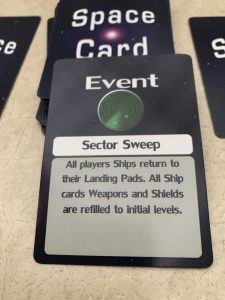 And sometimes it is an npc opponent a player must battle. 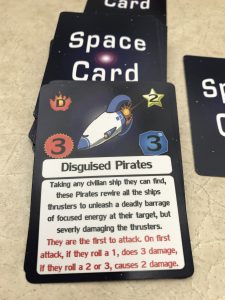 Before we get into battling let’s talk about ability cards. A player can expend sensors by reducing their sensor energy and then rolling a d6. If it is even, you get to draw an ability card. If you don’t you get nothing. Ability cards can be used in one of 2 ways- as a counter to an attack (after you get attacked) or as a hazard you play on a card you think an opponent may attempt to go to.

Each card has different effects which add a fair amount of flavor to the game and add a much needed sense of variation.

An npc card is a space card that when flipped over shows a ship with weapons and shields and an effect. 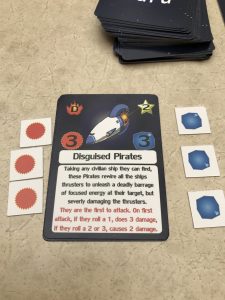 When you see the card, the number of weapon tokens (red) and shield tokens (blue) are placed out as designated by the card.

The Player attacks first (unless the card says otherwise). In this case, the card does state the reverse. A die is rolled. If the die is equal to the weapons value or lower the attack hits and the shield value of the player is reduced by one (unless the effect says otherwise).

The player can then player an ability counter card. In either case, it is now the players turn to attack. A die is rolled. If the value is equal to the weapons value or lower, a shield token is removed from the ship.

This back and forth continues until one of them is down to zero shields.

It is the same as above- rolling for weapons value or lower and reducing shields accordingly with the attacked player using counter cards to modify damage and energy levels. Whoever reaches 0 first returns to base and the victor remains on the card.

End of the round.

Once all players have completed their turns, the cards that the ships are on top of are given to the players. The points of each location are on the upper right.

The end of the game.

Once all cards are taken/discarded from the space card deck, the game ends. The player with the most points wins.

So what did I think? Honestly, it’s not a bad filler. It is contentious but the game obviously doesn’t take itself too seriously, which is nice. In a way this reminds me of a space munchkin before munchkin went mainstream. It’s not bad.

That said, this game is full if repititions and not enough variations. All good art is repetitive. It characterizes a theme or a process. But variation is what keeps your mind from drifting too far away. All great art has both consistency and variation. This game could learn from some variation. The ability cards are a small dose of that and they yield tremendous results.

I would also like to see a bit more strategy. When the game comes down to many many dice rolls, it’s a bit random and repetitive. Sure, we have the weapons energy level binding us to how often the weapons pay off. But something like technologies that could be carried between rounds and that was earned through early game investments rather than random card draws would be a real nice change.

And then finally, there are some weird corner cases. For instance, there are must draw cards that have an immediate effect applied to all . The card read that I should add 4 space cards to the sector. Done. But then one of the additional cards said to do it again. Eventually you end up with a table full of cards. Not only does this not male sense, it is potentially game breaking amd would make sense to remove from the game entirely. 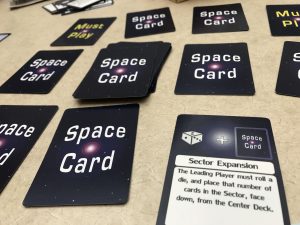