Kill Code is a simple cooperative roll and move game with a modular board. All you have to do is have one of your teammates (whoever is holding the kill code) reach the terminal before the drone reaches each of you, and terminates you.

It’s actually a fairly simple and yet fun strategic game.

So what comes in the game? 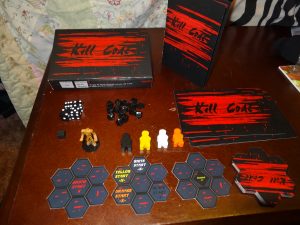 You get 4 dice, one for each team member, a dozen obstructions, a terminal, 4 team member pawns, a drone, 3 flower hexes (terminal location, drone location, and the starting location for each of the team members) and then a stack of other locations.

Below, you can see the researchers start on the upper left, the drone starts to the upper right, and the terminal is on the far right. 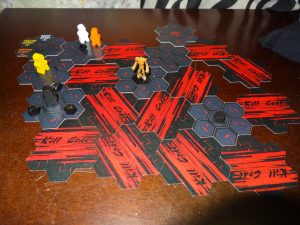 Play begins by each player rolling a die. Each player pools their die together and determines which die they will take to best strategically determine how far each player can and will go. The player with the kill code cannot take the highest value dice. Also, players in adjacent locations can trade a card. 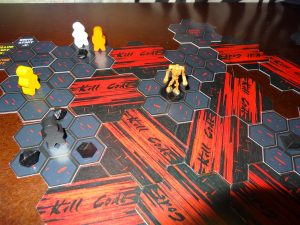 When a player reaches a flipped over location, they flip the hex over to reveal its spaces. Until that point they don’t know how much debris may be in the way, in some cases blocking the path entirely. 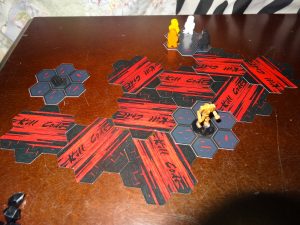 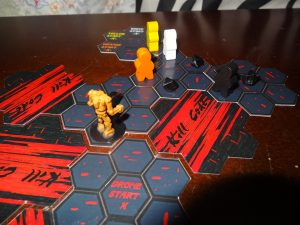 Should the drone reach a researcher, the researcher is eliminated and their pawn is removed from the game. Then the card that the researcher holds is activated. In some cases this may mean that:

So it’s a roll and move game: not my favorite but there is a twist. This game is all about managing risk in a team setting. As you roll die together, you are attempting to predict the die rolls and movement of the drone, to the end where you give one player an advantage of reaching a destination, protected by that drone.

It is a blast luring the drone out and then awaiting the judgement. You roll the drone die only to discover that… they rolled a low roll, and instead didn’t move as far as you had hoped, ruining your plans. Or, the more fun of the two, the drone moves exactly how you wanted him to move, just finishing right before your researcher, allowing the kill code to slip by the drone. However, that next turn is very important. Again, anything can happen.

It has those moments of tenuous strategy that keeps you sitting on the edge of your seat. But at the end of the day, you are just rolling dice, which brings you back down to a grounded experience.

In the end, it’s a great filler game and we’d recommend it.

It can be picked up here: