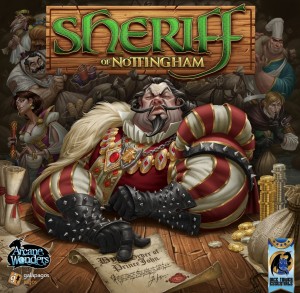 Yesterday we looked at at the mechanic of bluffing and how and when it works in games. Today we will be looking at Sheriff of Nottingham; a game that uses this mechanic quite well.

Sheriff of Nottingham is one of those rare games that when I first hear the premise I know the game will be one that I will either love or hate but am not sure at the time which side of the fence the game will land on. The game sounded like it was a party game made for a small group; and yet when played it was nothing of the sort.

Each player takes on the role of a merchant attempting to get goods into Nottingham; there is one thing between you and the market, however, that being an over ambitious sheriff who doesn’t understand how hard it is for an honest merchant to make a living… which is why you may or may not be honest.

Each player starts the game with 30 gold and works with the goal of ending the game with more gold than their competition. Gold is earned by either catching contraband as the sheriff or having non-contraband inspected by the sheriff as a merchant. At the end of the game additional gold is earned for each of the cards successfully taken to the market as well as becoming the king or queen of any particular resource (having the most or second most of said resource).

Each round a new player takes on the role of the sheriff with play continuing until all players have been sheriff 2 or 3 times depending on the player count. The round consists of 5 phases; market, loading, declaration, inspection, and end phases. During the market phase players can discard cards from their hand to draw new cards before loading cards into their merchant bag during the loading phase. Once their bag has been loaded merchants enter the deceleration phase in which they must tell the sheriff what they are bringing into the city. They must declare the truthful number of cards; but the actual cards can be anything they desire. A player may thus declare 4 apples while actually bringing in 2 apples, a crossbow, and a chicken; or just 4 apples. During this declaration phase players may bribe the sheriff to open others bags or to not open their own bags; these bribes can be in the form of money or promises. The sheriff then chooses which bags to open and which not to; once a bag is opened there is no turning back. If the opened bag holds only the declared good then the sheriff must pay the player the penalty cost; for the goods. If the sheriff opens the bag to find any cards other than those declared the player must pay the sheriff the penalty for the non-declared cards. Note: players may not declare they are bringing in contraband goods. Any declared goods are allowed into the city while the discovered contraband is placed in the discard pile, if the sheriff does not open a bag all goods are placed in the player’s market; goods being revealed while contraband is placed face down to be revealed at the end of the game. The end phase sees the sheriff passed to the player on the left of the current sheriff and each player drawing back up to 6 cards before the next round with a new target phase. There is of course sub rules and more happening than this quick overview, but again this is a review of the game not a how-to-play tutorial.

The game is made a game by the bluffing element; bluffing is not only allowed but encouraged. There are plenty of fantastic plays you can watch of this game; Board With Life and TableTop among others. You can see some players in these choose not to bluff and play the game straight. This is a valid strategy in that players can win without bluffing; to win in such a manner, however, required the other players getting often caught in bluffs as contraband has a much greater payoff than the other goods.

Aside from the meta gaming element the game’s core mechanics work well enabling characters to rid their hands of unwanted cards for the sake of becoming king or queen of a commodity, or simply to rid unwanted cards. This phase adds additional strategy as a player may discard contraband in the ruse of playing it straight then handing a bag full of contraband to the sheriff.

The art in the game is fantastic and whimsical; acting to feed the theme slightly while also serving to merely make cards easily identifiable at a glance. The components are quite simple, mostly cards, but very helpful in the form of the player market. Each player has a character board of their color showing their merchant as well as spaces to place each of the resources taken to market with the king and queen values shown. The only complaint I have heard thus far was a desire that the boards were two sided with a male and female of each color. Doing so would have increased the art budget, however, and is in my opinion unnecessary; though it would have been a cool feature.

There is little room for analysis paralysis as the prime actions are simultaneous and not too difficult; the sheriff can be over analytical but liberal application of gold can serve to quicken the process. The game’s theme is fun and fitting.

As a whole I give Sheriff of Nottingham a 8.5 out of 10. It is much better with 4 or 5 players than 3 and even then was enjoyable. If you are looking for a good game that players of any level can enjoy this is a great one to pick up.

Come back Tomorrow where we take a break from Worker Wednesday to look at a game we recently posted a video of; Biblios.