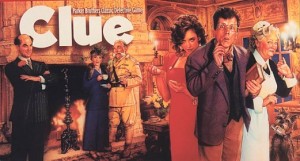 I have received a few requests to look at the mainiest of mainstream games; games such as Monopoly and Clue. I have debated doing so and alas I have given in. Clue is one of the few games that I find in the houses of my non gamer friends and am willing to play.

Clue is one of the games that I often look at with a sense of lost awe. It was once a game I loved as a child; not because of frequent victory but rather because of a frequent challenge. Clue, along with Pit and Scotland Yard was a game that was no stranger to my families table. Similar to these games it was not one my parents would take easily on us, but more on that later.

Clue is a game that most if not all of you are moderately familiar with so lets see if I can summarize the rules in 3 sentences. In Clue players take on the role of house guests; the twist, their host has been murdered. Players move about the mansion via a 2 die roll movement system; when in a room players make acquisitions, declaring a character, weapon, and location; the location being the one they are in. Going in turn order the first player who has a hand with one of the suggested cards must reveal it in secret to the questioner. When one feels ready they may go to the center and declare the guilty party, weapon, and location. A correct acquisition wins the player the game while an incorrect accusation leads to player elimination. I don’t think I made my 3 sentence goal.

Clue is a game that is not uncommon in family game nights; the key mechanics are simple enough being grid based movement, hand management, and memory. There is a surprisingly element of strategy in a game marketed as being for ages 8 and up. Along with the standard game Clue, like Monopoly, has seen many alterations; some of which are quite fun as they alter the game in interesting ways while others are merely window dressing and play the exact same way.

The art and components in the game will vary by when your copy was purchased as well as which publisher’s version you obtained. In the versions I have seen most commonly the art is fun; each card showing the character, locations, or weapon in a fun or silly way. A few editions have nice miniatures for the characters as well and others even the weapons. There is a fair amount of room for analysis paralysis; especially for more strategical players who are still refining their strategy.

When I was first introduced to the game I was quickly defeated. My parents who had been playing the game since before I was born had already developed decent strategies and managed to beat me before I even narrowed down one of the three elements. Realizing my father wrote down every acquisition from every player I quickly realized there was more to the game then met the eye, as an avid ready of Hardy Boys, however, I had a plan.

Experimenting with various methods of emulating this strategy I worked with my brother to form a strategy of our own that could challenge our fathers. The following game night we were shown victorious. In short; we use a shorthand system of documenting the other players hypothesis as well as the player who can help them, as well as those that cannot. This instantly narrows down which cards other may or may not have thus enabling our own guesses to be better at narrowing down the suspect, weapon, and location.

Like many childhood favorites Clue does not score as well as it would have for the 8 year old me; though the element of nostalgia still applies. I would and do gladly accept games of Clue when offered though I don’t find myself offering it as often as elementary me would have. Many other deduction games rose and filled the place that was once taken by Clue; games such as Mystery of the Abbey, Scotland Yard, and Letters from Whitechapel. I cannot deny, however, that at one point for a younger me Clue was one of my favorite games. I must confess that due to the strategy used by those around our table those who come to the game without the same experience often refuse to return to the game, with us at least.

Come back Monday as we look at another mechanic; this time Grid Movement.
Until then you can find us on facebook and twitter at:
Twitter @Gam3rsR3mors3
Facbook /TheGamersRemorse