COMBI is a small but sleek deductive card game by Magato Studio. COMBI, as stated is a deductive game, where you are forced to play cards from your hand that resemble your secret numbers, and yet you are trying to hide your numbers. As the first person to guess another’s number wins the game!

Guess your friends secret numbers in this casual deduction game for everyone!

COMBI is a deduction game using a very simple components: the number 1 – 9 and the colour Red, Green and Blue. Choosing only 2 numbers from their opening hand, players can only play a card that has their secret numbers and a matching colour with the card in play. Some cards have an ability to disturb your opponents such as: Draw 2, Reverse and Discarding All player’s hand. Each player must race to find the other’s secret number, but be careful with players who play just to finish their hand.

To the Rubric, Batman!

In COMBI, your task is to deduce and ultimately guess another player’s secret combination. Naturally, your opponent’s are trying to guess yours as well.

Player’s can guess another player’s secret number during their turn, but if they are wrong then they must draw 2 cards, increasing the liklihood that their hand will hold their secret number, resulting in discarding a card and giving a hint.

Finally, the game concludes when the first person correctly guesses another’s secret code or runs out of cards. 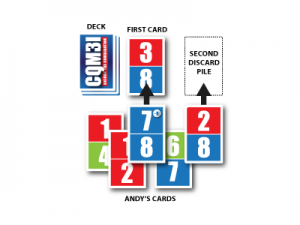 In this example, Andy has 5 cards in his hand. If we say that Andy’s secret code is 7 and 9, then Andy would discard either his 7/8 blue card or his 6/7 green/blue card, as both have the number 7 and a blue coloration. Since the last card played with a 3/8 of red/blue, then blue is one of the colors requested. However, if Andy’s numbers were 9 and 3, then he would have no cards to discard and instead he would discard to the second discard pile.

Alright, I was pretty impressed with this little game. In a way it is a nice upgrade to UNO. It celebrates the heritage of that game while adding a much needed cerebral aspect to it. I was also happy to see that the designer didn’t incorporate a ‘Last Man Standing’ component to this game. The concern I have is when it relies so heavily on luck. It is quite possible that one person is dealt a bad hand and loses the game as a result. If for instance, you are dealt a hand that all share the same number, however, one would argue that you would NOT choose that number. Fair enough. let’s say you get a hand of cards that are very disperse and then you pick a couple of those. The other players started with a +2 draw and they all play it on their turns. As a result, you get 8 cards in your hand. And then you have the unfortunate mishap of drawing all cards with your number on it. You will lose. There are no two ways about it. I mean, sure what are the chances? But for what it is, it was a pretty entertaining game that I enjoyed. What’s more, you can share the game with anyone. I mean anyone. an 8 year old niece? done! An 80 year old grandparent! Done!

This game is well recommended for a quick casual game where other games have a barrier of entrance that is just too high. If you find yourself reaching for UNO, reach for this instead, your brain will thank you. It can be picked up here: