Grab you bugs and rocks its time to get cooking! Check out Sean, Eric, and Brian’s review of Ogre Chef by Malevolent Donut’s Games.

Prepare yourselves; it is time to terraform! Check out our preview of Outer Earth; on Kickstarter now!

You can back the game here: http://www.tinyurl.com/outerearthKS

Part III of my voyage into 5E has arrived! And as promised this time we will look at spell casting, inspiration, and movement.

Inspiration is a new mechanic to Dungeons and Dragons that I am a huge fan of thus far. To illustrate inspiration I must first explain how advantage and disadvantage work in 5E. When a player makes a d20 roll they will roll a second d20; if they have either of these conditions. If they have advantage they use the higher roll of the two d20s while if they have disadvantage they take the lower of the two rolls. Inspiration is designed to encourage and reward role playing, which is partially why I as a DM love it! As players act in a manner that reflects their character's personality traits, flaws, ideals,...

Check out Brian, Sean, and Eric try on their villainous side in Mayfair Games’ new game Villainy!

Roll for initiative and let part II in the yet unknown length series on D&D 5E begin!

In part one I did a brief overview of the Starter Set and promised I would follow up with a review of the adventure that came with it; The Lost Mine of Phandelver; it is time I made good on that promise! *note: there will be spoilers so keep that in mind as you read on. 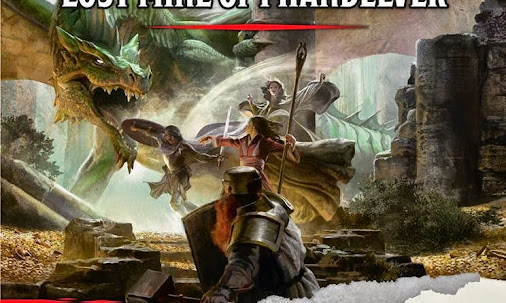 The adventure begins with the players having a traditional hook; in this case they have been hired by a dwarf to bring a load of goods to the town of Phandelver with the promise of pay and potential future glory. Not all bodes well, however, and (spoiler alert) the party find the dead horses of the dwarf and his human companion. before being ambushed by goblins.

As the players fight and likely win they are faced with the decision to seek the goblin’s lair or continue on to Phandalin. In my game the players continued on after arranging the horses in a manner to mark where the last goblin had begun to flee before being killed. Why they used the horses to do so is your guess as good as mine… As the journey progresses the players find themselves involved with a band of ruffians which eventually lead them to a run in with (spoiler) a drow calling himself “The Black Spider” who is seeking the same mine the players are after.

There are plenty of side quests the players can choose to delve into as well as repercussions the DM can throw in based on which order they choose to do the quests in; I for one like to use some of these so as to remind the players that time matters; if a family is kidnapped by goblins; chances are that family won’t live for however long it takes for you to level up 5 times…

Thus far I and my party have been enjoying this adventure; my players created their own characters from the players handbook (review forthcoming) which added another level beyond the pregenerated characters; though one of the pregens is cousins to the dwarf who hired the party so while my party lacks that particular hook they make up for it in originality and more in depth backstories.

Wizards also has introduced the factions early on in this campaign and players can be propositioned by a few NPCs to join various factions based upon the player’s character and how they play that character. As a DM who plans on running free and creating my own quests and campaigns this is exciting as it opens the door to future quests; if a player joins the harpers; I could create a campaign for the future in which some guild members come in search of that player in need of assistance; perhaps a neighboring kingdom is getting too power hungry and the harpers need that player to infiltrate the keep and encourage the rulers to reevaluate their priorities or perhaps just gain information to see if further action is required… so many options!

That is what I liked best about this adventure; it opens up many doors but doesn’t leave you feeling like you are missing something; the quest you began you completed and are left with the world to explore and adventures to be had!

The adventure comes with great DM aids in the well marked and detailed maps; though I wish they had fold out maps like some previous adventure companions; but the maps are all available at a reasonable rate on the artists website http://mikeschley.zenfolio.com/p856083253 I personally purchased some and then printed them to scale, cutting them to room sections so I could place them as the players explored the areas; I did not, however use minitures as I am attempting to keep this adventure as designed as ‘theatre of the mind’. for future adventures and ‘Hoard of the Dragon Queen’, however, I may try out the new system with miniatures. The book contains all the needed monster blocks in the back which can easily be scanned, copied or summarized to the DM’s preference. I did find myself wishing I had a DM screen more often than not just for the visual reminders of stat blocks and what not; but made do with cards I made for myself. More advanced DMs likely could recall this from memory while newer DMs may just play with the rulebook on the table.

The layout of the adventure is very simple to follow with XP being tallied at the end of the entire adventure as opposed to per minor encounter. My players were initially disappointed as they want to watch their xp raise as they kill creatures; but eventually came around to the idea an accepted it. The art partnered with the adventure guide greatly aids the DM in telling the story though I wish at times there was a tad more narrative to spark my imagination; though I am getting more used to flushing out the world as I see fit.

I will not go into super spoilers here; but if you would like us to post battle reports and scenario summaries let us know on facebook or twitter and perhaps the people will get what they want! And next time come back as I take a look at a few of the updated rules in 5E; specifically spellcasting, inspiration and movements/actions.

Welcome to part 1 in a… yet to be determined length series on the newest edition of Dungeons and Dragons. We will begin our adventure with the Starter Set; a very good place to start. The Starter Set acts like the Red Box from many of the previous incarnations of the beloved RPG with a few changes to fit the new rule set. Upon opening the box one will find 6 dice (d4, d6, d8, d10, d12, d20), 2 booklets (rule set and the Lost Mine of Phandelver adventure guide), 5 premade characters (2 fighters, a rogue, a wizard, and a cleric), and an encounter advert that doubles as a blank character sheet. Unlike the Fourth Edition Redbox, however, this set does not include everything you need to build a good introductory character, however, Wizards...

Brian, Eric and Sean face off against the ghosts in the 2014 kinderspiel des jahres winner Geister Geister Schatzumeister

New video; new format! Check out our first Grab Bag featuring 5 games some awesome some… not so awesome – Jump over to youtube and let us know what you think! Do you like the format? Would you like us to play any of these games in a standard long format review?!