Survivalistic is a game that came out several years ago from the good people over at Mandry’s Gaming Co. We managed to meet up with him at Geekway to the West last year and shot a ‘how to play’ along with some gameplay action shots. Unfortunately, the vast majority of it suffered from bad audio. But rest assured, I believe Eric said something to the effect of, “Wow! That’s the best game I played all con!” and you know what? That’s saying something.

So let’s hit the rubric and we can break it down.

Survivalistic follows the tried and true method of most card games. You start off with a set of cards and play the initial cards in front of you. Then on your turn you draw cards, you play cards, but the details of this process is what sets the game apart from others. The initial cards you play down are characters. Each character have a set of stats: Strength, Agility, Wisdom, Food Cost, and Water Cost. 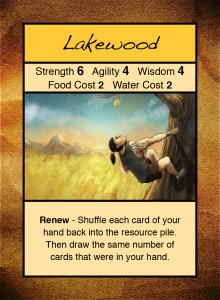 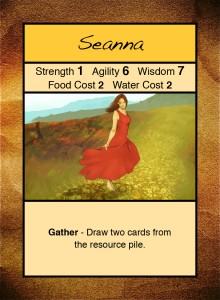 In the two examples above, you see the name of the character, as well as the stats, but you also see a special ability. Lakewood can perform a special action each turn called, “Renew” and Seanna can perform the special action, “Gather”. This special and unique ability is what sets the tone for the theme. Each character has some beautiful art, a set of stats, but the special ability is what seals the deal. But let’s move on and hopefully you’ll see what I mean.

Once you have a survivor in front of you, you can add more survivors to make a team, OR you can strengthen your characters by adding equipment. 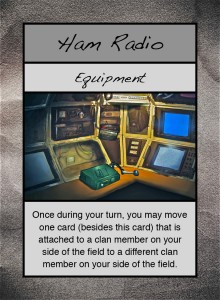 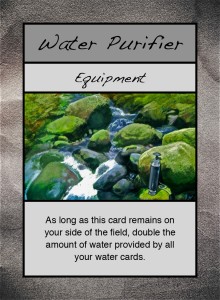 You place these cards underneath your survivor (s), effectively pairing them with the equipment. The equipment grants each player some special abilities. There is a limit to the number of equipment a person has, but it also makes them a target. There are cards and abilities out there that allow players to steal equipment from another player, so watch out!

On a player’s turn, players may attack another player by adding their stats of a single character and to single out another character on the table. They roll a die and add it to their choice of stat: strength, agility, or wisdom. The defender rolls a die and adds it to their choice of strength, wisdom, or agility. The higher roll wins. The player who wins does damage to the loser. 3 damages and you are out. 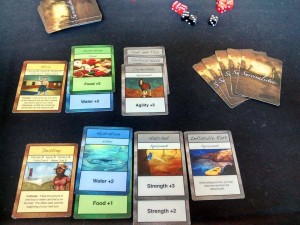 Wait a minute, what’s this about a water purifier? Why would I want that? Well, each player IS trying to survive. As such, each character needs their required amount of water and food to survive, otherwise they take damage. So although a person may start out with an amazing character, that character may die because they require more food and water than can be obtained. But who knows, maybe that character helps to obtain the resources necessary for the other survivors in your tribe, but ultimately sacrifices themselves. See? this is the theme I’m talking about.

At the end of a player’s turn they have to feed and hydrate their survivors with the required amounts or pay with their health. In many cases this eliminates survivors. Hopefully you are able to find more. 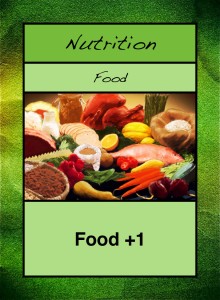 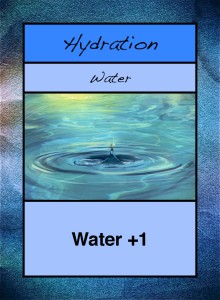 The first player to obtain 3 survivors and be able to feed them and keep them hydrated, wins!

We had a blast playing this at Geekway to the West. I’d recommend it. The graphics are decent, and the gameplay is good, but the theme clicks the entire game into focus. I could easily imagine shows & movies like, “Lost”, “Mad Max”, or “The Walking Dead”.

This game is highly recommended and can be picked up here: https://www.thegamecrafter.com/games/survivalistic