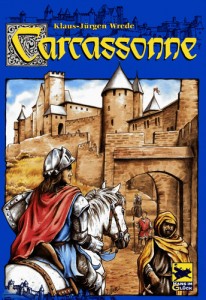 In yesterday’s post we looked at the mechanic of Tile Placement; today we will take a closer look at how that mechanic plays out in Carcassonne.

As is the usual we will only look at the base game of Carcassonne and save the expansions for a latter date, and for Carcassonne the expansions are many. I was first introduced to Carcassonne while in high school. My mother received the game as a gift asking for it as she thought it looked interesting. We quickly read the rules and began playing; all four of the players new to the game we each developed strategies as the game progressed. When the game ended we were eager to start over with our newly developed and honed strategies. After a much better game two we had to play a third game to try our even further developed strategies. The game has since been played less and less as other games rose and fell from the spotlight, but Carcassonne is one that I still look back to on occasion for a fun game of tile placement.

In Carcassonne players are developing the area around the French city of Carcassonne by constructing roads, fields, monasteries, and cities. They do so by drawing and placing tiles then allocating their workers to a part of the tile in hopes of scoring points with the worker during or after the game; in the end whoever has the most points is declared the victor. The game begins with the start tile placed face up in the center of the play area and the remaining land tiles placed into a bag. Each player is given 8 meeples; one of which is set on the score tracker and the other 7 acting to earn them points.

Like many games the youngest player is the first to begin. The turn order is simple and quick with the active player drawing a tile from the bag and choosing how to place it, rotating it however they like and setting it in a manner that it is adjacent to at least one other tile, and all sides of the placed tile are adjacent to matching sides (field to field, city to city, road to road, etc). After placing the tile the active player may take an available worker from their supply and place it on the newly placed tile.

Some of the locations hold the promise of returning a worker upon completion while in others the worker remains in play until the end of the game. The field being the only of the later. Once the player has allocated a worker or chosen not to do so play passes to the next player. The rules specify if a tile is ever drawn and cannot be placed (all players must agree that the tile does not fit anywhere) then the tile is returned to the box and a new tile drawn, in all the games I have played I only recall this happening once.

The game seems simple enough; draw a tile, place it, add a worker, pass to the next player. There is, however, a deep wealth of strategy in the secondary rules. When a worker is placed they claim that item; another player cannot add to the same road, city, field, etc and claim it as well. If a player thus has an elaborate high value city and you want to find a way in to share the wealth upon completion you must place a city piece so it is not connected, claim the new city, then find a way to build your way into their city without them blocking you off. You are also only allowed to place one worker per turn; often forcing a player to choose between a quick few points on a road or hoping to score big later on with a field.

A player scores and retrieves the worker on Roads, Cities and Monasteries when the individual conditions are met. For a road the player scores when the road becomes closed at both ends or forms a closed loop. When a road is completed a player with a worker on the road retrieves the worker returning it to their supply and scores 1 point for every tile used in that road section. Workers placed on a monastery are scored when the monastery tile is completely surrounded by other tiles, both adjacent and diagonally. When the tile is surrounded the worker is returned and its controller scores 9 points. Cities are completed when they are fully encircled by walls. Due to the varied shapes of the city pieces they can become as large or as small as the builder desires; though if the builder dreams too big the other players may try to jump in on the action or make completing the city difficult. Once the city is inclosed by walls any player with a worker in the city scores 2 points for each tile used in the cities construction; there are additionally some city tiles with a banner on them, which score the player(s) an additional 2 points. The workers on these locations are immediately returned to the player upon scoring and can be used for later placements. The field tiles work differently. When a worker is placed in a field they remain there until the end of the game.

Once the last tile of the game has been paced the end game scoring takes place. During end game scoring each worker still on a road scores 1 point for each tile in the road, workers in cities score 1 point for each tile in the city and one for banners on the city tiles, and workers on monasteries score 1 point for each tile adjacent and diagonal to the monastery and a point for the monastery itself. Then the field scores are calculated. First players must calculate the individual field boundaries, fields stop at city walls and roads. I have found it helpful to figure out if any players are sharing fields before tabulating points as just like the cities and roads only the player with the most workers in a field will score points on the field; though for a tie they each score the points. Once the field boundaries are known the scoring player(s) receive(s) 3 points for each city that the field touches. Some cities can be touched by multiple fields while some fields will touch no cities.

The game itself is not entirely difficult but as tiles and workers are placed the gamespace fluctuates creating more difficult and weighty decisions. The end of the game scoring can cause some problems for younger players as the field boundaries are calculated while for strategic players it can cause thrilling conclusions as they leap from behind to snag the win with a high scoring field. The tiles themselves look nice; though the attempted 3d perspective can cause some interesting angles as city walls seem to be falling in on themselves. Identifying the pieces themselves isn’t difficult as roads are clearly roads, cities clearly cities, etc.

The tile placement mechanic, which is key to the game’s function, plays out interestingly as it develops the world and yet where the workers are placed tends to me most players strategic focus. In actuality the two mechanics are partnered; once a worker is placed it influences future tile placements; while tiles are at times placed with the sole goal of setting down a worker. This partnership is what I enjoy most about the game.

A final thing I will leave you with is the idea of a hybrid mechanic. Many refer to the use of your workers as strictly area control. But I think of it differently; it is a hybrid between area control and worker placement. As you place your workers you are not retrieving a resource in response but rather strictly points; and the reward is often delayed. As you are placing your workers, however, the space you are claiming is an area to which you are establishing control. I have thus referred to the mechanic while teaching the game as ‘worker influenced area control’.

As far as the game handles the rubric; it does fairly well with a 7.5; it was once higher but other games have knocked it down a bit as the mechanics have been adapted further and the pacing can get caught up later in the game as players have more options for tile placements and as the scores escalate.
Visuals – 1.5 // 2
Skill/Luck – .75 // 1
Pacing – 1.5 // 2
Theme/Immersion – 1.5 // 2
Mechanics – .75 // 1
Fun Factor 1.5 // 2
Carcassonne is still a great tile placement game worth taking a look at even if only to see where the mechanic has gone in the last 15 years.