Welcome to part 1 in a… yet to be determined length series on the newest edition of Dungeons and Dragons.

We will begin our adventure with the Starter Set; a very good place to start. The Starter Set acts like the Red Box from many of the previous incarnations of the beloved RPG with a few changes to fit the new rule set. Upon opening the box one will find 6 dice (d4, d6, d8, d10, d12, d20), 2 booklets (rule set and the Lost Mine of Phandelver adventure guide), 5 premade characters (2 fighters, a rogue, a wizard, and a cleric), and an encounter advert that doubles as a blank character sheet. Unlike the Fourth Edition Redbox, however, this set does not include everything you need to build a good introductory character, however, Wizards of the Coast has provide an great into rule pdf with that information you can find for FREE HERE. 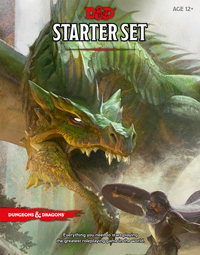 The introductory rules included in this set are a good summary of everything a new DM will need to know to run a good campaign but avoid going into some of the more obscure rules that likely a new DM doesn’t need to worry about at this time; which will be addressed in the Dungeon Master’s Guide to be released later this year. The rules act fantastically as a bridge taking players from previous editions and helping transition them into the new rule set.

The adventure meanwhile is designed to take the player characters a good ways into the world and up to level 5. The adventure is very easy to follow for an advanced as well as a new DM and include fantastic and easy to understand maps. There is, however, no large fold out maps to be shown to the players as the game is designed to act more as a ‘Theatre of the mind’ landscape. I personally miss the maps as I found they greatly aided the players be on the same page as the DM – for this purpose I began by printing out maps for my players so they could at least see the same world as I see but I think in the future I will find myself sketching up simple maps much like what someone would draw in a tavern while giving a party instructions before they set out on their adventure… so perhaps that was intentional on WoTC’s part.

The rules themselves are fairly easy to follow and seem much more logical to me than some previous incarnations; I personally loved the reversion to feet in the form of speed and range, the use of inspiration to reward roleplaying, as well as the slightly modified spell casting system enabling players to cast any prepared spell any number of times in so long as they have an available spell slot.

The adventure and characters are a great point to start new players but limited in the class and race selection, however, I feel this set would be fantastic for letting new players dip their toes in the water before encouraging them to pick up a player’s handbook and create a new character for use in a custom encounter or Hoard of the Dragon Queen (which will be reviewed later)

Like all RPGs the set is limited only by what the players and the DM/GM puts into the adventure and thus everyones milage may vary but for me and my play group i see this leading to bigger and better things! Next time we will look at the included adventure “The Lost Mine of Phandelver” before moving on to the core books (player’s handbook & monster manual) as well as the first big book adventure; Horde of the Dragon Queen.

If you are interested in following Gamer’s Remorse on our D&D journey let us know on Twitter and Facebook and we may make our campaigns followable; ie record/broadcast them for your entertainment.